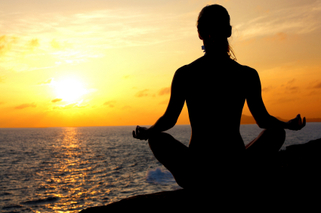 The benifits of meditation are many and varied. Latest research indicates better healing, better study results, less depression and better health all are gained by the the practice of meditation.

For millennia, meditation has been an exclusively spiritual
practice for serious seekers. By quieting the mind and deeply relaxing the body,
the meditator experiences deep states of inner peace, and ultimately, higher
states of awareness. There are many subtle benefits of practicing
meditation—greater intuition, compassion, awareness, focus, among others—but
they are ancillary. Ultimately, meditation is the practice of mystics seeking
union with God.

Physical and health benefits of meditation
As meditation has become more well-known in the West, scientists
have begun to quantify its physical benefits in hundreds of studies.

Significant benefits have been found for many health conditions, including
heart disease, cholesterol, high blood pressure, insomnia, chronic pain, cancer,
and immunity. Because meditation is a low-cost intervention with no
side-effects, it shows promise for relief of a wide range of societal and health
problems.

• In a study of health insurance statistics, meditators had 87% fewer
hospitalizations for heart disease, 55% fewer for benign and malignant tumors,
and 30% fewer for infectious diseases. The meditators had more than 50% fewer
doctor visits than did non-meditators.(1)

• Meditation lowers blood pressure to levels comparable to prescription drugs
for those who are normal to moderately hypertensive.(2)

• Meditation has endorsed by the NIH as effective for the relief of chronic
pain. Chronic pain sufferers experience a reduction in symptoms of 50% or
more.(4)
• 75% of long-term insomniacs who have been trained in relaxation,
meditation, and simple lifestyle changes can fall asleep within 20 minutes of
going to bed.(5)
• Meditation reduces blood sugar levels in diabetics.(6)
• A group of inner-city residents suffering from chronic pain, anxiety,
depression, diabetes and hypertension were trained in meditation. They
experienced a 50% reduction in overall psychiatric symptoms, a 70% decrease in
anxiety, and a 44% reduction in medical symptoms.(7)

• Brain scans show that meditation shifts activity in the prefrontal cortex
(behind the forehead) from the right hemisphere to the left. People who have a
negative disposition tend to be right-prefrontal oriented; left-prefrontals have
more enthusiasms, more interests, relax more, and tend to be happier.(8)

• Researchers tested novice meditators on a button-pressing task requiring
speed and concentration. Performance was greater at 40 minutes of meditation
than after a 40-minute nap.(9)

• Those with smoking, alcohol, and eating addictions who have been trained in
meditation break their addictions with significantly lower relapse rates than
those receiving standard therapies.(12)

• Brain scans of meditators show increased thickness in regions of the cortex
associated with higher functions like memory and decision making.(14)

• Meditation appears to slow aging. Those meditating five years or more were
12 years younger than their chronological age.(15)